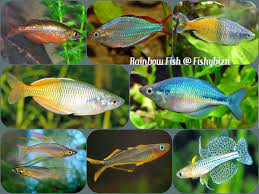 There are several rainbow fish species. This article discusses the Boesemani Rainbowfish, Melanotaenia splendida, and Bedotia geayi. If you’re looking for a new pet, try one of these species. Each is a unique and beautiful fish to have in your aquarium. Read on to learn more about each of them! Listed below are some characteristics of these fish, as well as pictures and information on each one.

The Boesemani Rainbowfish is a species of rainbowfish native to the Ayamaru Lakes in Indonesia. It has a long and shallow body, a distinct color pattern, and an orange-red or purple dorsal fin. Males are larger than females, reaching 10 to 12 cm. Their fins are bifurcated and almost opaque. The females are smaller, reaching only three to four inches in length.

Male Boesemani Rainbowfish have distinct colors and are often distinguished from their female counterparts. After reaching puberty, they display their colorful bodies and will direct the females to the spawning area. Females will usually follow the male to the spawning site, but males are expected to rest for at least a day after spawning. The male Boesemani Rainbowfish needs a 40-liter aquarium, a small filter, and plants. A separate spawning tank must be created for females and males.

A large aquarium is essential for keeping a Boesemani Rainbowfish. Boesemani Rainbows are active and require a lot of space. They like lakes and tropical environments. They need a large aquarium with plenty of space. Aside from this, their size and color require special care. For optimal health and care, it is essential to choose tank mates that get along with their habits.

Although they’re friendly and colorful, they can also be shy. Because of their timid nature, they are best kept as a shoal, but they do not necessarily prefer other species. You can keep Boesemani Rainbowfish with other fish of similar sizes in a shoal, like Danios and Tiger Barbs. They also make excellent tank mates and are a peaceful addition to a community aquarium.

A unique member of the rainbow fish family is the Celebes rainbowfish, a sailfin silverside endemic to the island of Sulawesi in Indonesia. As the only species of its genus, it is a little more difficult to find, as most of the known specimens are found in tropical areas. Nevertheless, there are plenty of rainbow fish species in the wild, and this article will discuss some of them.

The Celebes Rainbowfish is an endemic species to Sulawesi, where it can be found only near the town of Maros. This species is also known as the Celebes Sailfish and is found in slow-flowing freshwater areas with high dissolved oxygen levels. This fish spends most of its day hiding in dense vegetation and eating insects, small worms, and plant matter.

This peaceful, hardy species requires a planted aquarium with plenty of plants and live plants. However, they also like open spaces, where males can display their colors. Rainbowfish require high water quality. Weekly partial water changes are recommended. Unlike most other tropical fish, these species can tolerate a moderately salty environment. In fact, they prefer freshwater to brackish water.

Despite its name, the Celebes Rainbowfish is not easy to keep in a freshwater aquarium. They are sensitive to water changes, and should not be housed in a tank with fin nippers. If you want a peaceful and colorful rainbow, this is the fish for you. But remember to check the water quality and temperature of your new tank.

The Male of the species is slightly more colourful and develops beautiful fin extensions. It spawns by laying eggs in the suitable substrate. Ideally, a Telmatherina ladigesi should be kept in a tank with a substrate suitable for spawning. You should also choose a tank size of 50-60 cm, as this fish does not spawn on its own.

There are many different rainbow fish species, but the red-tailed silverside is one of the most widely-spread. Endemic to the Mananjary River drainage in Madagascar, it is threatened by habitat loss. It is often confused with B. madagascariensis, another species of rainbowfish found in the aquarium trade. So, how do you tell the difference?

The Bedotia geayi belongs to the family of Atherinidae. This species can tolerate a wide range of temperatures and is best kept in a school of six or more. They require regular partial water changes, and can grow to be 15 cm (6 in) in length. The Malagasy Rainbowfish is an excellent choice for a community tank.

The Madagascan variety is a beautiful example of a hybrid between the Madagascar Rainbowfish and Bedotia geayi. While this species is not as common as the former, they are both colorful and beautiful. Bedotia geayi is a very good choice for a community aquarium, and is best kept with several other species of rainbow fish. This species prefers a large swimming area, but will tolerate many different types of food. It also breeds easily, and you can find several individuals of this species in one tank.

The female Bedotia geayi does not have a red spot on the lower jaw like the male. The female is a little more colorful than the male and has a fuller body. It is also slightly larger than the male. This species is native to Madagascar. They are a great addition to a tropical fish tank. The red spot on its lower jaw is also a great indicator of whether or not the species is male or female.

There are three major types of rainbow fish: Australian, South American, and African. The rainbowfish species Melanotaenia splendida is the most common and widespread. It can grow up to 10 inches in length and weigh as little as half a pound. It’s also one of the easiest to keep. Because they don’t require a tank of water with a low-pH, they are great for beginners.

The colour of Melanotaenia splendora varies widely, with males having orange stripes on their gill cover, and yellow spots on their fins. Females are generally silver and have translucent fins. There are three subspecies of this fish, and they have a wide range of colors. Each subspecies has its own distinctive appearance, which can help you determine which one is right for your tank.

The Eastern Rainbowfish was first described scientifically by Peters in 1866. It has a striking pattern of colors and can be difficult to distinguish from other rainbowfish species. Nevertheless, there are some tips that can help you identify these fish in your aquarium. A quality flake food with supplemental proteins is recommended for these fish. And while this species is easy to care for, it’s important to remember that it’s omnivorous and requires a clean tank.

The Tiger barb is a colorful rainbow fish with a deep body outline. It can grow to nine centimetres (7.5 inches) in length. It lives in freshwater, acidic, and well-vegetated environments. The males are larger and have more vividly coloured fins than the females. It is a non-guarding species. It tends to live in shoals of six or more.

Can betta fish live with guppies?
Is Dropsy Contagious?
Betta Fish Vs Guppie
Plants For Betta Fish
Caring For a Black Neon Tetra
Why Do Betta Fish Fight?
Albino Bristlenose Pleco
Bird Flight and the Relationship Between Feather and Fish
Chili Rasbora Fish - Looking For a Good Fish For Your 10 Gallon Tank?
10 Reasons Why Does My Axolotl Swim to the Surface?
Caring For a Gold Ram
What kinds of Fish can Live with a Betta?
How to Be Brave If You Are Easily Scared
Can Axolotl Live on Land?
How to Avoid Stress in Rainbow Fish
Is My Angelfish Swimming Upside Down?
LED Lights and Natural Sunlight For Betta Fish
Betta Fish Vs Fighting Fish
Betta Fish and Bubbles
Why betta fish make bubbles?