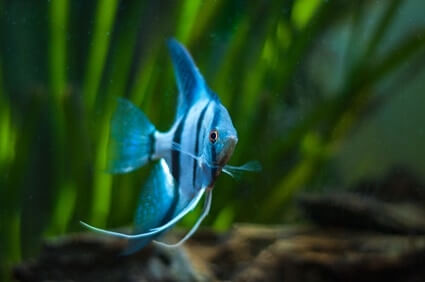 Angelfish and betta fish can live together in the same tank, but some things should be taken into consideration before introducing them to each other. First of all, both fishes thrive on a variety of foods. You can mix a diet of freeze-dried foods and high-quality flake and pellet foods, but live food is also essential for both species. Bettas and angels can be fed using a floating Betta log with a feeding hole at the top.

Keeping betta fish and angelfish together

Keeping betta fish and angelfish is safe if you understand their differences. Angelfish are territorial creatures that are less aggressive than male bettas. However, both species can become aggressive towards each other. If you are considering introducing both to your aquarium, make sure to check their behavior and make adjustments if needed. Angelfish and bettas are best kept in a 29 gallon or larger tank.

A tank filled with colorful fish is a sight to behold, but they can also pose a risk. Not only will angelfish and bettas fight over territory, but they will also be aggressive towards each other. Bettas and angelfish require some space and quiet time. You can try keeping them together in a tank with rocks and plants to prevent them from being aggressive toward one another. If you can, introduce your angelfish when they are young, so that they can get used to each other.

Bettas and angelfish are compatible and can live together in a tank of the same size. Nevertheless, if you want to keep them separately, make sure you have a spare tank for bettas. If you decide to keep bettas together with angelfish, try to make sure that they’re in similar tank conditions. Angelfish are generally more active and require less space than bettas, so be careful not to overfeed them.

Although bettas don’t need each other, males will not like their female counterparts. This is largely because males are territorial and will often attack them when they feel threatened. Besides, female bettas are not as aggressive. They will generally get along with each other but will only fight over territories once they find each other and spawn. Unless you are careful, male bettas will eventually kill their female partners.

If you’re looking for a freshwater aquarium, you should be aware of the differences in the tank requirements for betta fish and angelfish. The size and condition of the tank matters, as do the species’ temperaments. Both fish are active, but their behavior depends on several factors, such as tank size and age. If your tank is too small, angelfish may get territorial and begin to fight with each other for territory. This can be unhealthy for your fish.

Bettas are schooling fish native to the forests of Southeast Asia. They like densely planted tanks with plants growing along the top. They are small and can grow up to two inches long, but look best in groups of three or six. Their streamlined bodies and short fins make them easy to spot in a group. These fish also like to live in schools, so you should try to keep at least one pleco per betta, preferably in a community tank.

A five gallon aquarium is ideal for Bettas, as it contains the lowest amount of water necessary for the fish to establish the Nitrogen Cycle. While it’s possible to do this with a smaller aquarium, the process will take some time. If you’re worried about the environment in your home, it’s best to use filtered water that has undergone a dechlorination process. A reliable filtration system is essential, as are frequent water changes.

Bettas are small freshwater tropical fish native to Asia and can live up to three years. They’re also remarkably adaptable, and will survive in different environments. They’re even the national fish of Thailand. Unlike many aquarium fish, bettas are able to live in rice paddies, rivers, and streams, ensuring they thrive in the proper environment. Despite their smaller size, bettas and angelfish are able to breed with other tropical fish, including rasboras, tetras, mollies, and tetras.

While Bettas grow horizontally, Angelfish grow vertically. Because of this, they require more space to swim in and out of the water. The tank size of both fish species should be at least 55 gallons. A larger tank can prevent territoriality and aggression. This means you should choose an aquarium that meets all the needs of both breeds. If you’re unsure of what size tank to buy, start your search by using a tank comparison website like AqAdvisor.

When caring for betta fish, you’ll need to make sure that they have access to fresh water and are kept in an area where they can easily communicate with their owner. While bettas are fairly intelligent, they also recognize their owners’ faces. Avoid putting your fish in a draft or near extreme heat. Also, do not place your fish near any direct sunlight, which can cause algae to overgrow. To solve this problem, consider buying a tank mate who will eat the algae.

Angelfish and betta fish can live in the same tank. But they should not be kept together unless they are compatible. In fact, some species are better suited for cohabitation than others. If you’re looking for a stunning and stylish tank, consider buying a MarineLand Portrait Glass LED Aquarium. Bettas can be territorial and aggressive. However, young angelfish can live in peaceful cohabitation.

However, there are a few important differences between the two species. Angelfish are much less aggressive than bettas, which makes them a better tank mate for bettas. Despite their similarities, angelfish and betta fish can have a highly hostile relationship, and there is a chance that the two species could end up destroying each other’s tank. For this reason, it’s important to keep an eye out for any signs of aggression between them.

Unlike bettas, tetras do not require a tank mate. Instead, female bettas should be kept separately in separate tanks. You should only add female bettas to a male’s tank for a short time after the eggs are laid. The male might chase the female betta if it finds her tank mate and the eggs hatch. However, some tetras and barbs are not territorial.

While bettas do well in tanks with a wide variety of mates, it is best to keep the two fish together. Ideally, they should be kept in separate tanks, but some hobbyists have experimented with putting other types of fish and invertebrates in the same tank. However, this is not recommended. Bettas are aggressive, and female bettas can be just as ferocious as male ones.

Attitude toward one another

Betta and angelfish have very different temperaments. While male bettas are generally more aggressive than females, female angelfish can be nippy as well. Angelfish can react in a similar way to bettas, so when introducing new fish, watch for signs of aggression. If you notice any of these signs, take action. Read on to learn more about these two species’ attitudes toward one another.

Betta fish can be kept with angelfish, but they should be of similar temperaments and be peaceful with each other. The female betta fish will have a better chance of forming a good tankmate relationship with an angelfish. Both species are prone to fighting, so choosing the right tankmate is essential. Listed below are some common problems and ways to avoid these problems.

When paired together, male bettas will often mirror aggressive behavior toward each other. Inexperienced owners may think that this is just play, but it isn’t. The two species are different in size and behavior, and some owners mistakenly believe it’s a matter of preference. Bettas and angelfish are similar in terms of water conditions and demes. If you’re looking for an interesting tankmate, consider putting angelfish in with a betta or dwarf gourami.

In addition to being aggressive, bettas and angelfish can also be peaceful towards one another. But if they come to an argument, they will often nip each other and flare their fins and bodies. In extreme cases, a fight can last several hours or even cause death in one or more bettas. In general, betta fish are top-water-divers and are therefore extremely territorial, which means that they will aggressively attack other fish in their territory.

link to How Many Angelfish in a 40 Gallon Tank?

Continue Reading
link to Can Goldfish Live in 80 Degree Water?

Can Goldfish Live in 80 Degree Water? Many people wonder if it's possible to keep goldfish in temperatures below 80 degrees. While the common goldfish are extremely hardy and will not be adversely...