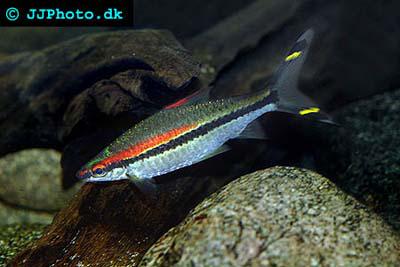 The denison barb is a very peaceful fish with very few known adverse characteristics. It is found in fast-flowing rivers in the Western Ghats of India. It is also known as the red-line torpedo barb and Miss Kerala. In aquariums, it can live in a variety of water conditions. However, they are prone to certain diseases, including Ich. As such, a larger tank is required.

Denison barbs are a peaceful fish

Generally, the Denison Barb is a peaceful fish, but they can be aggressive when competing with other species during feeding times. You can keep them in a school of at least six, with smaller fish and larger ones in their school. They will help each other maintain a natural display and sort out pecking orders. They make excellent community tank inhabitants and are generally peaceful, but some individuals may be aggressive around food.

As a schooling species, the Denison Barb will require an aquarium with several levels. They need a variety of habitats and ample swimming space. If you want to keep up to six of them, you need an aquarium with at least 55 gallons in horizontal format. If you plan to keep a larger school, you’ll need a much larger tank. Keeping a group of them in one tank is best done in a larger one, as a group of them can get aggressive.

A Denison Barb is a large, active mid-level swimmer that can be intimidating to shy species. They dart around shoals and display their colorful stripes. Their silver base color makes light catch on its scales, which shimmers in the water. The backline is striped with red and black and is also dotted with bright colors. A Denison barb lives for about five to six years and can reach up to 15 cm.

The Denison barb cannot breed in captivity, but it is possible to spawn them accidentally. It’s best to keep them in an aquarium with soft water and plenty of plants to scatter their eggs. A small tank will not do, since they’re highly active swimmers. For best results, set up an exclusive barb tank with at least 55 gallons of tank space. These fish also need soft water, live plants, and an artificial light source to produce sperm.

They tolerate a wide range of water parameters

Care for a Denison Barb isn’t difficult. Their active lifestyle means they’re very sensitive to changes in water parameters. This is a good trait for beginners, as this type of fish is not difficult to breed. They grow to be a fairly large fish, and require large, open swimming spaces. They’re also good tankmates for beginners, and their bright colors will appeal to novice fish enthusiasts.

Since they require intensive aeration and filtration, Denison Barbs should be given a 30% weekly water change. They’re generally non-aggressive, so they’re not a threat to other fish. Unlike some other species, Denison barbs are best kept in pairs or flocks of six to seven. They’re easy to breed, but don’t overfeed!

While the Denison barb can’t breed in captivity, it can spawn accidentally. In Germany, aquarists have successfully spawned fifteen of these fish by injecting hormones into the water. The fish laid their eggs on aquarium plants, and the fish hatched the offspring. An accidental breeding was also reported by Chester Zoo. It was a two-part breeding, the second in acidic and soft water with pH 6 and GH 2-3.

A denison barb’s ideal water environment is cool, ranging from 15 to 26 C. Keeping a moderately acidic pH level of 6.0 is enough for the barb to survive. Moderately hard water is fine, but they’re fine with soft water. Calcium and magnesium ions do not affect denison barbs. If you want to keep a healthy population of denison barbs, make sure your water is soft to prevent stress for the fish.

They are susceptible to Ich

Denison barbs are peaceful, colorful, and active. Often forming schools, they move throughout the aquarium. However, they can become aggressive in a crowded tank. They can also nip fins, so be careful to pair them with other nonaggressive fish. Denison barbs are best kept in a tank with other similarly sized, active fish. They can also work well in community aquariums where size differences are extreme and aggressive fish are not present.

Roseline sharks and denison barbs can live well together, but keep in mind that they are susceptible to Ich. You should keep at least 6 Denison barbs per tank. This number is higher for roseline sharks. For a mixed species community, use at least 100 gallons of water. Denison barbs are sensitive to water parameters, so check them weekly. Make sure the pH and hardness levels are 6.5 to 7.5 and the hardness is between five to twenty-five dH. As well, don’t let waste build up in your tank. Regularly vacuum the tank to remove debris.

While the best treatment for Ich is to keep your fish healthy, early infections often go undetected. If you notice that a fish is scratching, it could be due to the parasite. Because it is a parasite, the denison barb is highly sensitive to salt. A 1.002 specific gravity is the optimum salt concentration for denison barb, but this is not an effective treatment.

Denison barb populations are threatened due to overfishing and the sudden popularity of these fish. It is critically endangered in its native habitat, so if you’d like to keep one, make sure it lives in an environment that is well-oxygenated. For optimal health, denison barbs should live in an aquarium with a moving water. The species is native to southern India and is also known as Roseline shark, Red-Line Torpedo barb, and Miss Kerala.

They need a large aquarium

The size of the Denison Barb’s aquarium should be at least 20 gallons. This fish is an omnivore, and they feed on small invertebrates and plants. A diet rich in meat and other nutrients is best for this fish, but they will also eat dry, frozen and plant foods. You can supplement their diet with quality pellets and live food. These fish are generally very easy to care for and are hardy.

You should not mix Denison Barbs with many other types of fish in your aquarium. The two most suitable fish for Denison Barbs are the Tiger Barb and the Rainbow Shark. However, they do not get along with discus and oscar fish. They also get along with other varieties of tetra fish and Sumatran barbs. However, they may have difficulties breeding if kept with other species of fish.

Denison Barbs live in fast-flowing rivers in the Western Ghats of India. They cluster around rocky areas that are covered with dense vegetation. Their ideal habitat would be warm and alkaline. If you plan to breed a large group of these fish, make sure to choose an aquarium that’s at least 55 gallons long. You can also consider a large tank with lots of open space for feeding and swimming.

Since Denison Barbs love to swim high in the water column, their tank should be equipped with gravel or sand. You can also place decorations around the tank. While the barbs don’t like artificial decorations, you can install live plants on the sides of the tank. A strong filter can help maintain a high water flow and low organic contamination. But don’t forget to use a high-quality filter.

The Denison barb is an imposing, large species of fish with a striking color pattern. Their silvery bodies are outlined with black stripes, while their dorsal fins are a mix of gold and silver. Their first rays of dorsal fin are a brilliant red, and their tails are dark blue with a stripe of yellow on each side. They grow up to 15 centimeters (5.9 inches) long and their lifespan is approximately four to five years.

The best Denison Barb diet consists of a mixture of live and dried foods. They will consume about two-thirds of the food in the first minute. Feeding them at least twice daily is recommended. You should mix up their diets in order to provide them with the variety of nutrients they need to grow. A variety of foods will also help keep their vibrant colourations. The good news about the Denison barb is that it’s easy to care for.

The Denison barb is a peaceful fish, but it can become aggressive if it is kept with smaller fish. The ideal tank mates for this species are other Denison barbs. Also, they need other fish with similar sizes and speeds. If possible, keep them in a school of five or more. They’ll enjoy company with other barbs as well as tetras and rainbows.

The Denison barb can grow to about six inches in length and has a life expectancy of five years. They live in fast-flowing rivers, so their diet will vary, but they are usually peaceful. They prefer to swim against the current and enjoy fast-moving water. You can pair this fish with most African Cichlids because of their gentle disposition. They do not bite or pick at other species, and they don’t fight over their food.

5 Types of Wood for Fish Tank Furniture
Why is My Betta Fish Pacing? A Few Tips
Can betta fish see in the dark?
LED Lights and Natural Sunlight For Betta Fish
Do Betta Fish Like Dark Tanks?
Betta Fish Vs Goldfish
Can Betta Fish Live in a Bowl?
Why Do Betta Fish Fight?
Is Seachem Excel Algaecide?
Can betta fish live with guppies?
Bettas and Tetras
Panda Garra - A Great Fish For Beginners
10 Reasons Why Does My Axolotl Swim to the Surface?
Honey Sunset Gourami
Betta Fish - The Difference Between Live and Floating Plants
How Long Do Axolotls Stay Pregnant?
Can Betta Fish Be With Other Fish?
What is a Mouthbrooder?
What does Betta Fish poop look like?
Is My Angelfish Swimming Upside Down?